I don’t know what I was expecting from ‘Winter is Here’, the first episode of Game of Thrones’ eighth and final season, but this was better. It goes without saying that I’ll be giving massive spoilers for the episode in this reaction post (It’s not a review!), so if you’ve not watched it you might want to look away now. Here’s a picture of Jon Snow to separate you from the juicy details:

Ahaha, it’s the wrong Jon Snow! Though come to think of it, Winterfell is very white, isn’t it?

The season opens with a rare bit of fanservice, as the people of Winterfell gather for the arrival of the Queen and her incestuous right-hand man. It’s a not-remotely-subtle callback to the series’ very first episode, with a random boy taking the place of young Arya Stark as he struggles to get a glimpse of royalty; Arya’s knowing smile as she lets him through says it all. It’s fanservice, but after seven series it feels earned, and the whole setup is an effective way of demonstrating just how far these characters have come (in every sense – perhaps now that most of the cast are at Winterfell we can do away with the discussions of ridiculous travel times that plagued last season).

Dany does it at warp speed.

The first episode of a Game of Thrones season is often more about touching base with the hundreds of characters rather than moving the story significantly forward. In previous years this has been a dizzying affair, zig-zagging around the map at breakneck speed to make sure everyone gets a few minutes of airtime. Having most of the remaining cast now based in one place allows for something altogether more satisfying, a broth of character moments as people who haven’t shared scenes together in years (or at all) get a chance to catch up.

Obviously it’s Jon’s reunions with his siblings that pack the biggest emotional punch, but my favourite has to be the quiet moment between Sansa and Tyrion. Both are very different people to the ones who attended the Purple Wedding, and better for it. This is where Sansa demonstrates exactly how wise she’s become, as she berates Tyrion for believing what the audience already knows to be Cersei’s lie. Game of Thrones has pushed Sansa closer and closer to the forefront since her escape from King’s Landing, and moments like this hint that something big is coming for the character – though it’s probably worth remembering the old motto: “You win, or you die.” 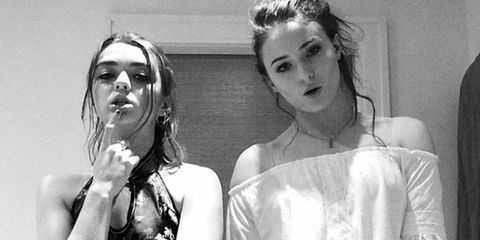 (Or you get high in the bathtub with your little sister, I guess..?)

Sansa versus, well, pretty much everyone is just one of many showdowns teased by this episode, and this is where things get really exciting. I suspect this is how wrestling fans felt in the weeks leading up to the recent Wrestlemania event, as more and more showdowns got added to the card. Theon’s heading back to Winterfell to face the Starks, Yara’s headed to the Iron Islands to prepare for a possible desperate final stand against the White Walkers, Bronn’s being asked to murder the Lannister brothers, Cersei is surely going to end up going full Basic Instinct on Euron Greyjoy, and even poor old Samwell is going to have to deal with the revelation that Dany offed half his family in cold blood. Game of Thrones has never been a show to play it safe, but as we head into the final stretch all bets are well and truly off; I don’t know if there’s ever been anything quite like it.

Of course, the elephant in the room (sorry Cersei) was always going to be the revelation that Dany and Jon are, in fact, aunty and nephew. Oopsie. Perhaps surprisingly, the showrunners decided not to hold this one back for later in the season, and Sam gives Jon the full grisly truth – though not before the lovebirds get their own magic carpet ride moment flying high above Winterfell.

I must confess, this didn’t go the way I was expecting. I, like many others, had been so focused on the burgeoning relationship between Jon and Daenerys that I hadn’t considered this revelation might drive a much bigger wedge between them than a strong feeling of queasiness. Jon immediately frames the news in terms of Daenerys’ sudden ineligibility for the Iron Throne. It remains to be seen whether Jon will un-bend the knee and launch a leadership contest (I’ve been watching too much Brexit), but given Samwell’s own issues with Dany at this point the star-crossed lovers could be headed for a far more petty and tragic fate than anything the Night King could dish out.

Westeros Side Story, anyone?

‘Winter is Here’ represents the calm before the storm. Gathering armies, happy reunions and even a few jokes – “My eyes have always been blue!” got a proper laugh out of me, as did Tyrion and Varys’ testicular chatter. Big things are coming; the trailer for next week suggests that the people of the North will be making their valiant stand sooner rather than later, and where the show goes from there is anyone’s guess. And of course, there’s the small matter of Jaime Lannister to deal with; just as the pilot ended with Jaime and Bran, so did this episode. But with Jamie a man seeking redemption and Bran (almost) a man who isn’t much of a Bran (god, that was torturous), will it be a warmer reunion than either might have expected? And how will the Mother of Dragons react to having the Kingslayer in her midst…?

One thing’s for sure: with a little over six hours remaining, Game of Thrones fans are in for an eventful month.

View all posts by Pete Dillon-Trenchard